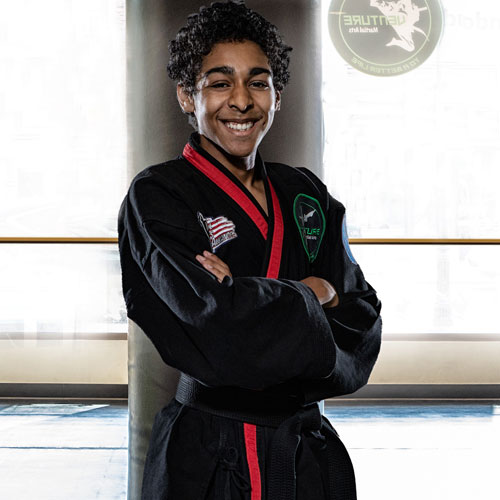 Akin Beckley began training in taekwondo when he was five years old. Chuck Norris was the first American to become a ninth-degree Black Belt, and Akin wanted to follow in his footsteps. He played soccer during that time and thought that being able to kick above his head would help him as a goalie. After a few years of training, he used a bicycle kick during a game and perfectly kicked the ball to his teammate who scored a goal. That moment was one of his greatest memories.

Growing up with parents as doctors, Akin saw his parents helping people constantly. When he become an instructor, helping people grow lit a spark inside of him. He loves to help people become better than they were the day before. Seeing the improvement of techniques and giving them an advantage in life is most important to him. After his little sister passed away he was able to find an outlet to grieve through Martial Arts training. His desire to combine helping people with taekwondo lead him to become an instructor with Venture Martial Arts.

Akin is enthusiastic about weapons training, specifically in weapons. He has the desire to make his sword form as great as possible. His goal is to become the first person to win a world championship with the sword form in both traditional and XMA forms. It’s a challenge because, in order for the strike to be proper, you have to be able to hear the sword swish as it slices through the air. He is confident in his ability to win that title. His passion for learning and the confidence learned through Martial Arts training are taking him to college and then hopefully law school, while teaching on the side.

Akin Beckley is an assistant instructor at Venture Martial Arts in Flatirons. He is a second-degree Black Belt.