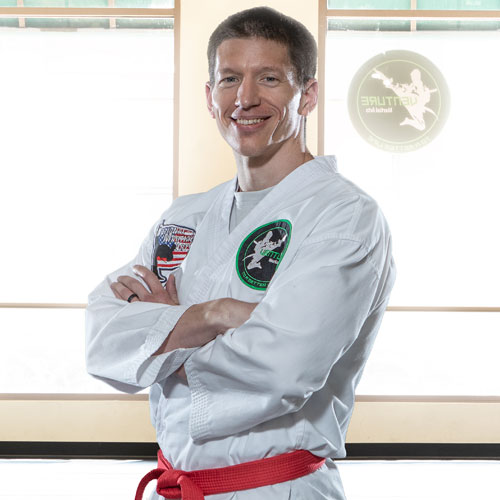 Jason Smith is 39 years old and grew up in California until the age of 15 when he moved to Denver. He is a graduate of Metropolitan State University of Denver with a BS in Biology and Chemistry. He started Martial Arts training when he was 18. In a true karate kid story, he was trained one on one for several years to learn how to defend himself in any situation. He became very close with his instructor and formed a lifelong friendship.

Even though he took several years off of training, Jason felt like his heart was not in any career that he pursued. He decided to go back to the Martial Arts world and became an instructor for Venture Martial Arts. He always loved training in Martial Arts and to be able to do it for a living feels like it isn’t even a job, it’s the greatest experience of his life. He loves to form that same bond he has with his own instructor with his students and fellow instructors.

He has found his own happiness in working in a career that has meaning and excitement. Martial Arts training has helped him become a better person and give him a job that he looks forward to going to every day. After facing rejection and failure in his own life, he wants to teach his students how to deal with losing and frustration in a positive way- how they can use Martial Arts to improve and succeed next time. He never imagined that he would be able to make a career out of taekwondo but is so thankful to get that opportunity.