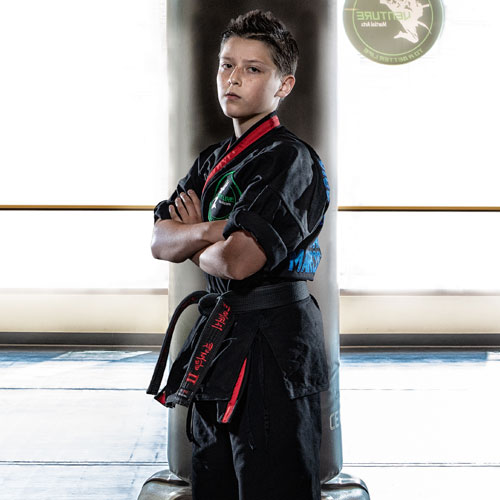 Marcos Sandoval is 14 years old and started taekwondo training when he was five years old. His parents got him started because they wanted him and his older brother Gabriel to have an activity to do together. He found that going through the ranks with his brother made it a really special experience so that they could push and motivate each other. Because of his skill and dedication, he received his Black Belt when he was 7 years old.

When he got his Black Belt, he wanted to get on the team with the rest of the instructors to bond and compete at a higher level. He has always been a competitive person and likes to see how he matches up against people that he knows. As an instructor, he enjoys taking the knowledge he gained from his instructors and giving it back to the rest of the community.  He loves to teach the little dragons (ages 4 to 6) because they are happy and excited to learn in class.

Marcos hopes to someday become one of the head instructors with Venture Martial Arts. He will continue his training with the aspiration to become one of the top competitors in the world as part of the National Martial Arts Alliance. He hopes to build a bond with all the students to help them move forward as he has in Martial Arts. Taekwondo training has made him into the person he is today and he plans to take the character-building he has learned in class into every aspect of his life forever.

Marcos Sandoval is a third-degree Black Belt and an Assistant Instructor with Venture Martial Arts in Flatirons.